Mahesh Bhatt has oscillated between the sublime and the ridiculous all his life. After starting off with commercial films, he sort of found his calling with Arth (1982), which offered an insider’s account on Bollywood relationships. Films like Saaransh, Naam and Daddy followed and he came to be considered as a formidable neo-art cinema director. At that stage, he directed the superhit Aashiqui, where the commercial bug bit him once more. But even in a commercial setup, Bhatt’s films were all about relationships. He understood that human beings are at their most complex when it comes to affairs of the heart and he tried to show both the highs and lows of relationships in his films. Presenting a list of some of the best films of the maverick director on his birthday. 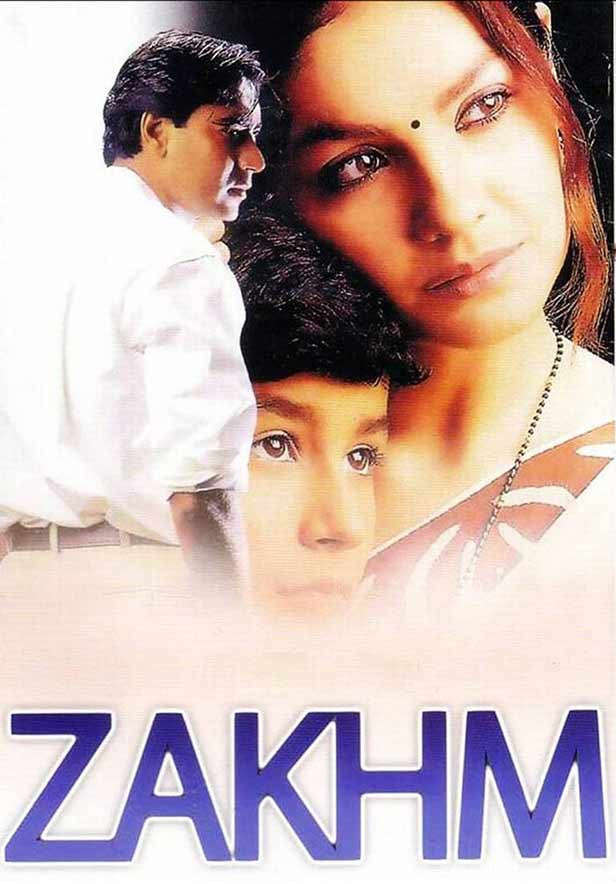 Zakhm carried shades of Mahesh’s own life. The film won the Nargis Dutt Award for Best Feature Film on National Integration. Ajay plays a music director whose mother (Pooja Bhatt) was a Muslim but chose to live as a Hindu after marrying a Hindu man. He learns her secret as a child but respects her wishes. Years later, she’s burnt by fundamentalists in a riot and succumbs to the injuries. Ironically, her younger son (Akshay Anand) is a fundamentalist himself and is against communal harmony. When he learns the truth about his mother, he decides to stand by his brother and fulfil their mother’s wish of being buried with Muslim rites. It was a poignant film depicting real-life concerns. Made against the backdrop of Mumbai bombings, it did ask some pertinent questions indeed and preached peace and goodwill. Ajay gave a restrained performance as the elder brother who has to make his volatile sibling see the light of the day. 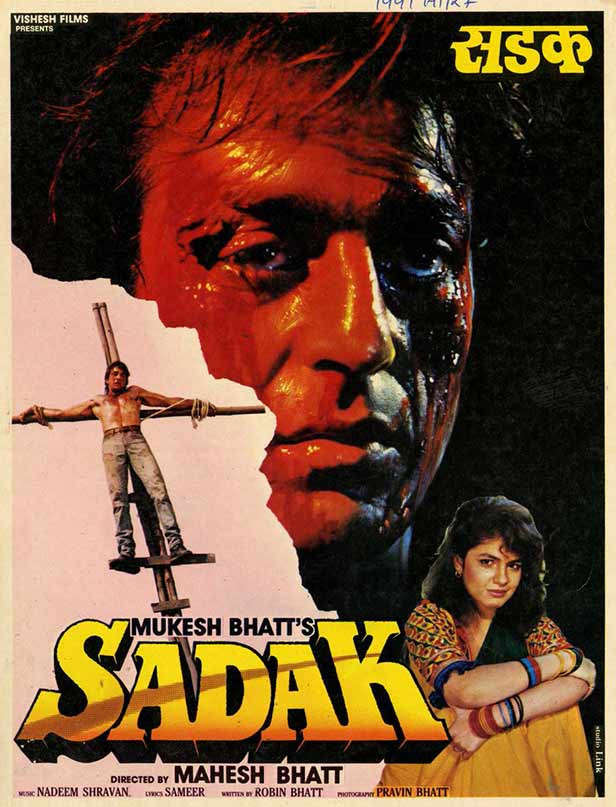 This gritty drama had him playing a taxi driver who falls in love with a prostitute and fights her pimp as well as the system in order to rescue her. The realistic portrayal by Dutt as a man fighting his own demons, while dealing with the ills of society is easily one of his best performances ever. It had superhit music by Nadeem Shravan. Songs like the romantic Tumhe apna banane ki kasam, sung by Kumar Sanu and Anuradha Paudwal and Zamane ke dekhe hain rang hazaar by Abhijeet and Anuradha stood out. Ravi (Sanjay Dutt), a taxi driver witnesses a girl Pooja (Pooja Bhatt) being sold off to a brothel. Circumstances bring them together. They fall in love and he desperately wants to buy her off from her eunuch brothel owner. It was a realistic tale indeed and Sanjay Dutt’s performance, as well as Sadashiv Amrapurkar’s acting, were greatly appreciated. 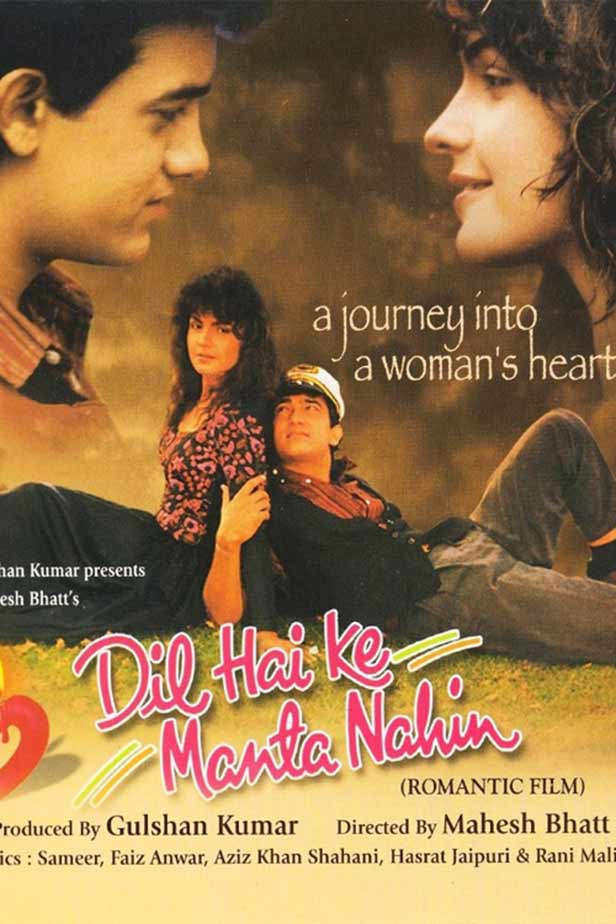 It was hugely inspired by the Hollywood hit It Happened One Night (1934) and the Raj Kapoor-Nargis hit Chori Chori (1956). The film was pure fluff and the sparkling chemistry between the two leads made for a compelling watch. It was Pooja Bhatt’s second film but she was confidence personified against an established star Aamir Khan. Pooja plays a rich heiress who runs away when her father objects to her getting married to her boyfriend, a rakish filmstar. She meets a scoop-hungry reporter, played by Aamir on the way. He helps her because he wants a good story and during the road trip to Bangalore, the two have a set of misadventures and begin to like each other. Whether it’s an on-the-road attraction or real love forms the crux of the film. The title song was hugely catchy and is still popular today. 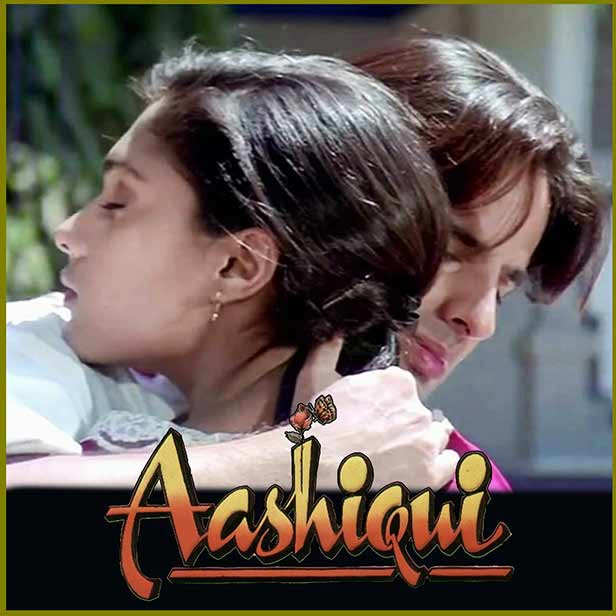 Aashiqui was a huge musical hit. It’s said the volume was so huge that T series stopped keeping track of the cassette sales after a while. Typically, the face of the debutantes is splashed over the posters of their first film. Only a maverick like Mahesh Bhatt could think of hiding them under a coat. The curiosity factor worked in favour of the film. The story revolved around an aspiring singer and an aspiring model falling in love and later helping each other in their careers. They have a falling out due to misunderstanding but later the differences get resolved and the couple gets a happy ending. Both Rahul Roy and Anu Aggarwal were touted to be the next superstars after the film’s astounding success but strangely never made it big. 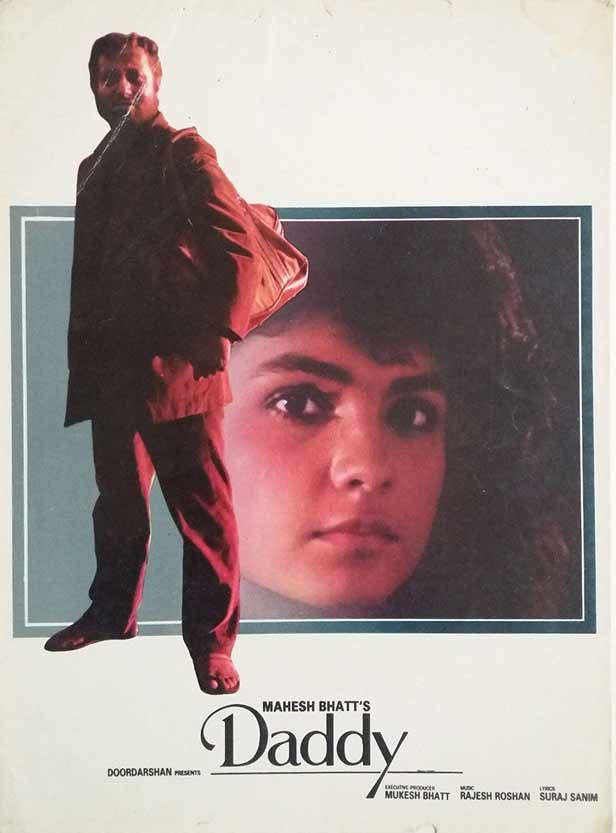 Pooja (Pooja Bhatt) has been brought up by her grandparents. She believes her father has died. Years later, she meets an alcoholic man who claims to be her father. She pieces together his story and finds that Anand (Anupam Kher) was a brilliant singer who fell prey to alcoholism. He was indeed her father. Her grandparents lied to her as they didn’t want her near him. Pooja’s love, however, acts as a catalyst for Anand. He begins to mend his ways and starts singing again. It’s a difficult road to redemption but Anand goes through all the hurdles and is triumphant in the end. The film was reportedly based on Mahesh Bhatt’s own issues with alcoholism. It has some lovely music and great performance both by Anupam Kher and Manohar Singh. 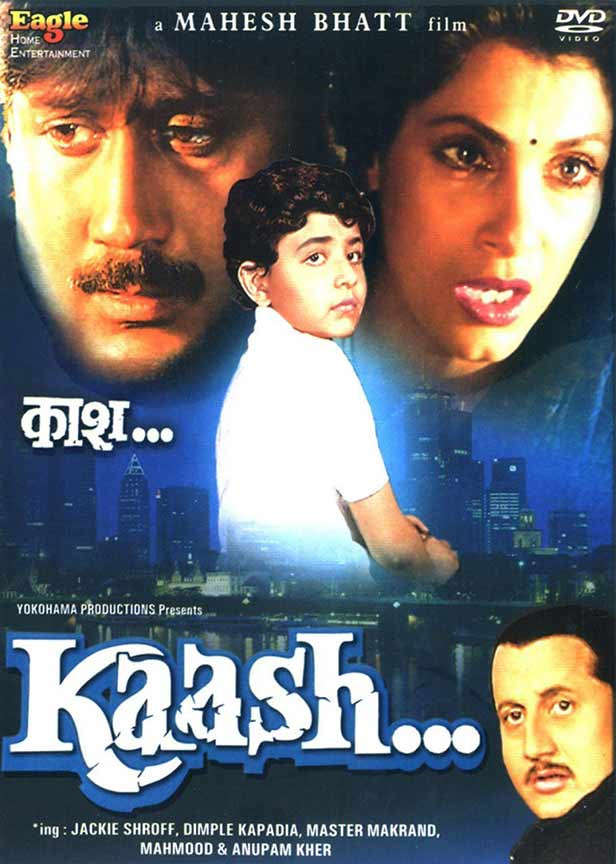 It was an emotional film depicting the turmoil of a separated couple who come together for the sake of their dying child and in the process discover love again. Only the discovery comes too late in the day. Ritesh (Jackie Shroff) is a successful film star who leads a happy life with his wife Pooja (Dimple Kapadia) and their seven-year-old child Romi. Their world comes crashing down when he gives a string of flops. They have to sell off their personal property to pay off creditors. An embittered Ritesh becomes an alcoholic. Pooja now starts working and it hurts his ego. Things take a turn when a stranger (Anupam Kher) saves Pooja from being molested and offers her a job in his firm. Ritesh thinks she’s having an affair and their fights increase. Finally, they separate but Ritesh finds out Romi is having a brain tumour. To give him a semblance of normalcy during his last few days they come together again and in the process rediscover their love. 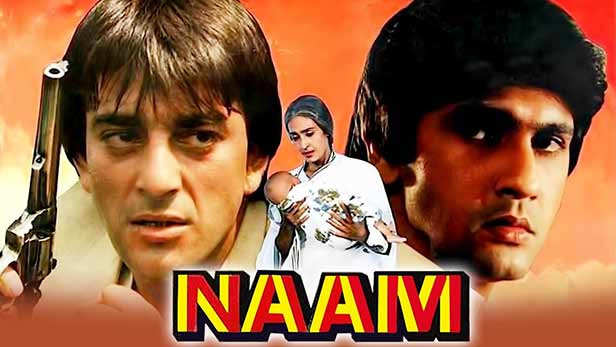 The film addressed the plight of the immigrant workers living in the Gulf and hence still has a relevance of sorts today. It was a musical hit and the Chithi aayi hai from the film still makes your eyes wet. The film made people take notice of Paresh Rawal and also turned Sanjay Dutt a star. Janki (Nutan) has two sons Ravi (Kumar Gaurav) and Vicky (Sanjay Dutt). They are from a lower-middle-class family. Ravi is the good son, while Vicky is a little wayward. He’s always getting into trouble and Ravi always rescues him. He wants to go to the Gulf and work there and Ravi somehow manages money for the same. But Vicky’s woes only increase upon going there. He comes to know he has come on a fraudulent visa and has to work under a dreaded gangster Rana (Paresh Rawal) in order to continue to live in the Gulf. This leads to further complications and he goes deeper and deeper into the life of crime. 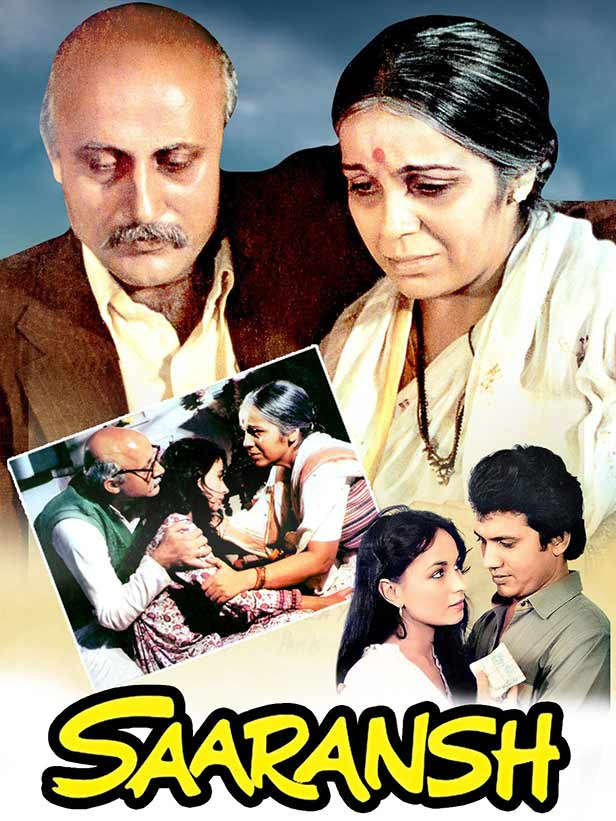 Saaransh dealt with the issues of loneliness foremost of all. When their only son is killed, old couple BV Pradhan (Anupam Kher) and his wife Parvati Pradhan (Rohini Hattangadi) are left with nothing to look forward to in life. While Rohini seeks solace in religion, her husband doesn’t even have that and takes to writing letters to his dead son. It also deals with corruption, which has kind of taken root in every corner of society. Pradhan makes it his life’s mission to fight it when those close to him get threatened. He all but loses faith in the system but fortunately for him, the Chief Minister turns out to be a former student of his and set things right. Anupam Kher, who was reportedly in his 20s, played the role of a 70 plus man with panache and was lauded for it both by masses and the critics. 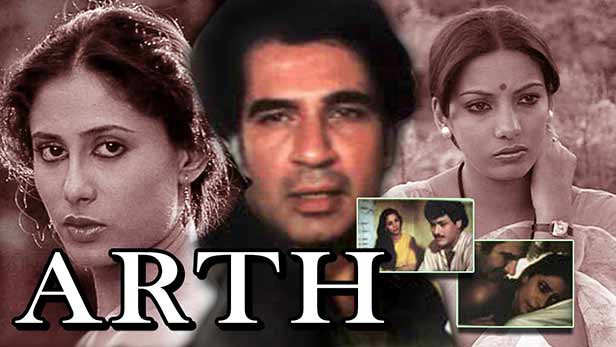 We don’t know if Arth was pure fiction or director Mahesh Bhatt took a leaf out of his own life and wove a story around it. Shabana Azmi won her second National Film Award for her seminal performance in the film. Inder (Kulbhushan Kharbanda), an egotistical film director is married to Pooja (Shabana Azmi). He has a successful association with an actress Kavita (Smita Patil) and starts an affair with her. Inder divorces Pooja for the sake of Kavita. A heartbroken Pooja is consoled by a good-natured singer Raj (Raj Kiran). Ironically, Kavita leaves Inder and Pooja too rejects him when he wants to make amends. She’s fond of Raj but ultimately doesn’t want to depend on him. She wants to give meaning to her life herself and not be dependent on any man to do so. She embarks on a journey of self-discovery, making her peace with Inder’s infidelity towards the end. The film’s highlight was the confrontation scene between Shabana and Smita, where the former let go of all inhibitions and goes hammer and tongs against the woman she perceives as a housebreaker.

Matter Of Shame For Country, Govts: Kejriwal On Hathras Incident

New Delhi: Delhi Chief Minister Arvind Kejriwal on Tuesday termed the death of Hathras gangrape victim a matter of shame for the country as well as for the governments and demanded the hanging of th
Read More

Excited for these movies and TV shows coming out in July !

Cricket has quickly transformed from a sport to a business platform now. The cricket boards are trying to have more tournaments in their countries while the cricketers have turned into freelancers
Read More